Stuff-onomics: Hidden Side of What You Own

By Tina Su Published in clarity

Coming back from India, I feel like a different person. Not because of India, or that this is the cliché thing to say, but because I’ve been so out of touch with my old reality that I see my old life with a drastically different perspective. On top of being away for 3 months, I’m starting a new job and we are planning to move to another country later this year. Sitting here amongst all my things packed in 50 boxes retrieved from storage, it feels as if someone had pressed the “restart” button on my life.

I’ve learned so many life lessons in the past few months, and I’ll start to share them with you over time. But the biggest lesson I’ve learned is how little we actually need. How little we need in order to be happy.

After traveling for several months in one bag: two pairs of pants, a few shirts, a jacket, several books, and my iPod (which I used once)…. Coming home to 50 boxes full of Stuff, it felt like my world was once again being weighed down by things I didn’t need. It felt as if the things will consume more of me than I will ever consume of it. Thus, my new project: to simplify my life… starting with Stuff.

Why We Collect Stuff?

“How little we actually need in order to be happy.”

This isn’t news. You knew that, and I did too. But why was it that I couldn’t part with those DVDs I will never watch again? Or, books I’ll never read? Or, clothing that I’ll never wear?

It is the stuff in our lives which we become attached to, because they give us a sense of self, a sense of identity. And by removing them, despite the clutter they cause in our inner space, it will feel as if someone is taking away our identity. It hurts the ego on a subconscious level.

Why do we collect stuff to begin with? For me, I collected stuff, because I wanted my life story to fit a certain persona and I collected stuff that would back up that story. For example, I wanted to be viewed as an artistic person, so I collected art books, photography collectables, and art works. They are displayed throughout my home, so that when I have visitors, they can see that I am indeed an artistic person and validate my story. Similarly, when I was heavily into technology, I wanted to be viewed as a highly technical person. I bought tech books and studied them so that I too could speak the lingo and fit in with my colleagues. These were my stories, but perhaps you can relate?

After playing the part of several personas, I have become the person I am today. What changed is that I reached the point where I was so full of stuff that I didn’t have room for any more. I have played the parts of an artist, an engineer, a fashion diva, a music collector, a dancer, a snowboarder, and an intellectual book worm. All these personas left me with more stuff than I need or even want. The physical stuff clutters my living space and the sense of peace I feel in my inner space. This state follows a quote I once heard: “Your outer world is a reflection of your inner world.” 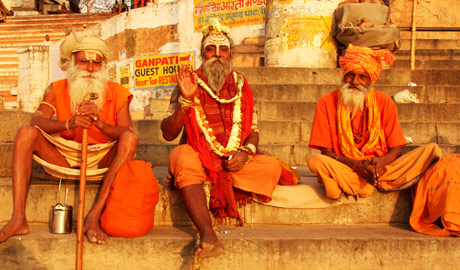 The Sadus of India are pretty content with life, yet they own very little stuff. They carry all their possessions in light cotton bags. “… the biggest lesson I’ve learned is how little we actually need. How little we need in order to be happy.”

Why We Should Let Stuff Go?

Removing excess baggage will give us peace of mind, clarity and liberty.
We are not slaves to the stuff we own. We are the masters of our lives and the creators of our stories.

If your house was on fire and you lost all your stuff, what would you miss most? If you had to move to a smaller apartment and needed to cut your stuff in half, what can you let go of? If you had to move across the country on a limited budget, what would you take with you? For everything else you’re leaving behind, perhaps they are not adding to your wellbeing anyway?

Moving is a great opportunity to practice letting go, since the process of packing forces you to realize how much you own. The more we can get rid of, the less we’ll need to carry around with us. Even when we don’t make drastic changes to our living location, it is still a therapeutic experience to periodically remove stuff we no longer need. Good questions to ask are: when was the last time I used this? Will I use it again? Will I use it often?

Make it an annual project to sweep through all that you own and see what you can remove. Just for fun, let’s call this the ‘Stuff Reduction Project’. Here’s what I did to give you some ideas.

First, select categories of stuff that will be included in your ‘Stuff Reduction Project’. For me, they were:

Each category is given 3 hours max and treated like an assignment. Try to spread the assignments out and don’t try to do too much in one day.

Start tackling each assignment with several empty boxes, or leave enough room on the floor for several sorting categories:

Ideas for Keeping Your Stuff Under Control

I know how difficult it can be to part with your stuff, even if we’ve never used it or will ever use it again, we save it for that day, when it might become useful, except that day may never come. Often times, I’ve kept stuff I’ve never used, simply because I’ve spent good money on it and felt bad for tossing it. As a result, the stuff ends up owning me instead of me owning it.

The following are some ideas for keeping your unused possessions to a minimum.

Don’t expect to get rid of everything in one sweep, it’s a step process of letting go and it’s okay to keep a few things from your Maybe pile. I still have a hard time letting go of some things, but with each Stuff Reduction Project, I get better at detaching and end up removing more clutter. Expect to do several sweeps over the next few years. It takes patience, determination, courage and practice to eliminate the unnecessary clutter of unused stuff in your life. You’ll love the sense of freedom once you’re done.

Do you have tips for reducing the unnecessary stuff in your life? Talk to us in the comments. See you there!

122 thoughts on Stuff-onomics: Hidden Side of What You Own